The evolution of the fountain pen through the ages

The evolution of the fountain pen through the ages

Knowing how fountain pens evolved over time is an excellent way to truly understand and appreciate the impeccable workmanship and extreme functionality of Visconti pens. This short overview on the fountain pen’s history will also touch upon our strong link to the artisan tradition, and some of the most interesting features of our collections.

Man has always had an ancestral need to express himself. In order to do so, ancient civilisations used plant stems to spread ink on parchment and metal styluses to make engravings on wax tablets. But how did we get to the fountain pen as we know it today?

The first step of our journey into the pen’s origins takes us to Ancient Egypt. Egyptians used an empty reed sharpened to a small point to make hieroglyphics on papyrus scrolls. Their ink was made of rubber, charcoal powder and other vegetable substances. A few centuries later, the Greco-Roman civilisation began to forge the first metal styluses to make engravings on wax-coated tablets.

A first turning point in the history of writing instruments can be dated between the 5th and 6th centuries A.D., when bird feathers began to be used instead of plant stems and metal styli. The term pen takes its origin from the latin word penna, meaning feather. Bird feathers were quickly replaced by their more durable and resistant cousin, the quill and remained popular until the 1800s. Their use was extremely intuitive: dip the tip in the inkwell to draw ink, and repeat the operation often to maintain a regular and legible stroke.

The invention of nibs

From the 16th century onwards, metal nibs which were cheap and easily reproduced on a large scale started replacing quills. However, the practicality of these metal elements was compromised by their excessive rigidity. In the late 18th century, James Perry, an English journalist and publisher, had the idea of cutting and piercing the nib to improve its flexibility. This functional change made the writing experience much smoother.

Once pen craftsmen had explored all the possibilities of metal, they turned their focus towards the study of steel, an even stronger and more durable material which was mounted on wooden or ivory dip pens. The most precious pens had nibs made of a noble and malleable metal, gold. At Visconti, just like our artisan forefathers, we have chosen gold for our modern Giotto and Giottino nibs.

The idea of the ink reservoir

Writing was never a clean art. In the passage from inkwell to paper, the pen inevitably leaked a certain amount of ink onto the paper or the writer’s hand, sometimes ruining hours of painstaking work. According to ancient writings, the first request for a reservoir pen is thought to have been made by the Sultan of Egypt himself, back in 1000 AD. He was apparently tired of having ink stains on his hands. At the end of the 15th century, Leonardo da Vinci also designed a pen with an ink reservoir, demonstrating that the problem of stains was still a recurring theme centuries later.

The first rudimentary reservoir models were used until the early 18th century, when the Enlightenment brought a wave of progress in physics and science. At this time, the fountain pen already had the main components that characterise it to this day, but it had a number of shortcomings that still made flawless writing an impossible task. The inventions of the nib and the ink reservoir were done separately and still didn’t work synchronously. It would take more time and research to create the fountain pen we use today, a writing instrument with a perfect synergy between all its components.

From the late 19th century, fountain pens which were used for calligraphy, correspondence, urgent messages and formal invitations, began to populate richer homes and workplaces. We cannot consider this a true boom, though. At that time, the technology of fountain pens had not yet been perfected. Problems with the density, capillarity and temperature of the ink meant the ink didn’t flow smoothly out of the nib and onto the paper, it would either flow too much or too little.

The first modern fountain pen that solved these defects was patented by Lewis Edson Waterman in 1884. The American insurance broker, frustrated by the lack of practicality of his fountain pen, decided to improve it by making a small hole in the rubber element that joined the reservoir to the nib. This allowed air to enter the ink chamber smoothly without changing its internal pressure. The flow of ink could be controlled by the pressure of the nib on the paper.

The avant-garde spirit of Visconti

More than a century after Waterman’s patent, Visconti has actively contributed to the evolution of the fountain pen with a series of innovations that have become real landmarks in the world of writing instruments. The most revolutionary are, in chronological order, the High Vacuum Power Filler (1993), the travel inkwell (1997) and the patented Double Reservoir Power Filling (1998).

The latter, in particular, marked a significant turning point in the lives of fountain pen enthusiasts, allowing them to fill their writing instrument with ink via two communicating ink chambers. Leakage due to changes in pressure or temperature are no longer a cause for concern. All the user has to do to prevent any unfortunate accidents is move the ink from the chamber closest to the nib back into the second one, and though the ink remains readily available, for all intents and purposes, the pen is temporarily empty.

Visconti’s successes haven’t merely focused on technical improvements to writing instruments but also in a re-exploration of iconic moments in the fountain pen’s history. The D’Essai collection (1990) brought back to life an over 60 year old celluloid; the Ragtime collection (1991), had a glass nib just like the fountain pens during the Second World War when metals were rationed for the war effort. 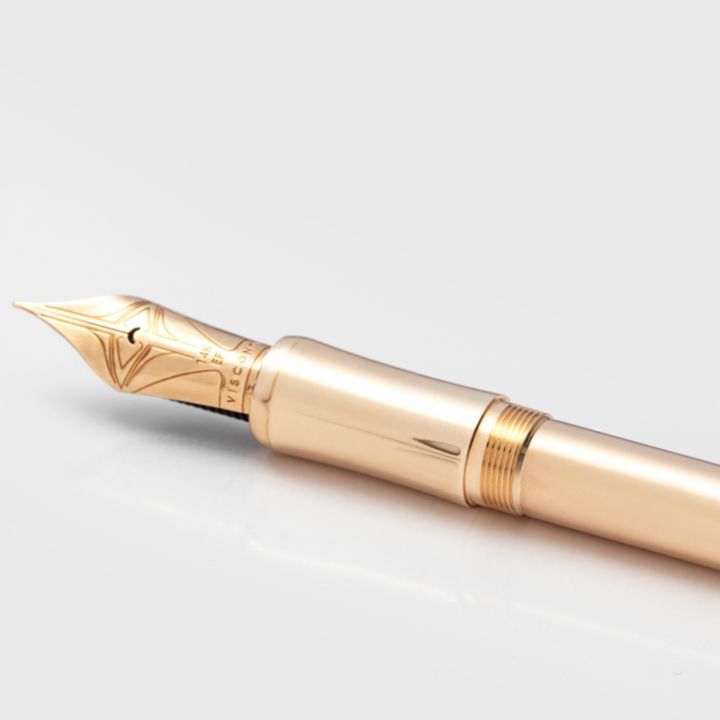 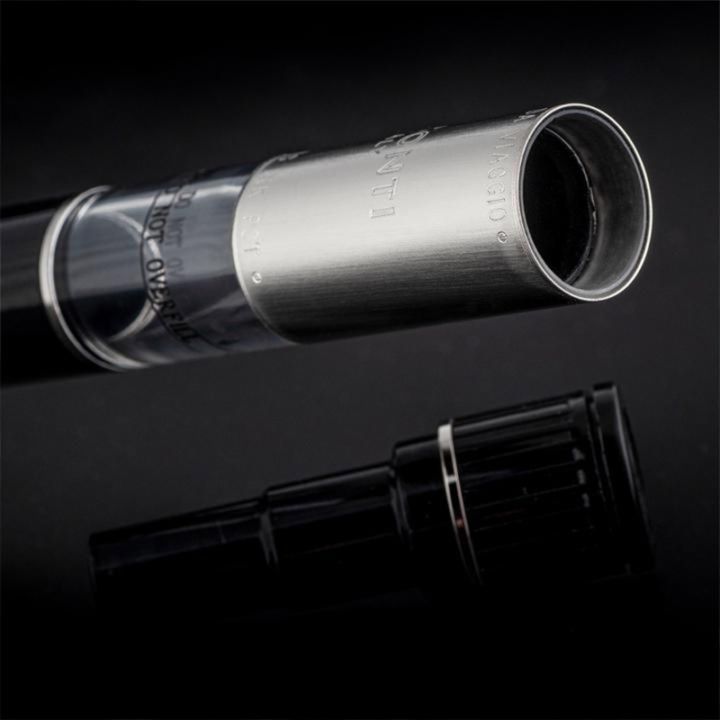 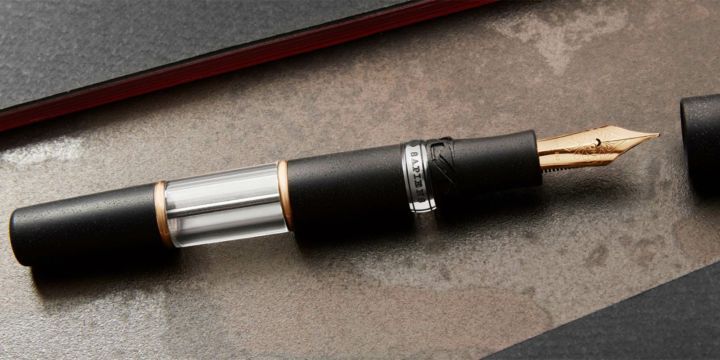 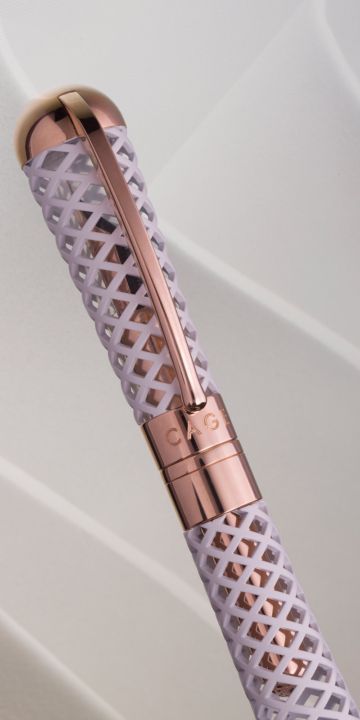